The cry was heard…….. the challenge accepted………. and over 60 Rotarians, family and friends arrived at the Gravesend Rugby club for the Annual Rotary Petanque Challenge. The tension was high as the teams from the Gravesend & Meopham, Northfleet with Ebbsfleet and Gravesend clubs grabbed their boules and headed off to do battle. Youngsters like Charlie Trimm were in the melee and accounted for themselves well against the seasoned veterans of French holidays like John & Dot Baker. No quarter was given as the light faded and the night air chilled. Mike Cubitt and his team of wonderful helpers refereed the matches and kept league tables and it was only when we were all back in the clubhouse did Mike tot up the scores. Taking sustenance from the magnificent buffet and quaffing a glass of red French wine (or two) we waited for Mike to announce the final score, which was….. 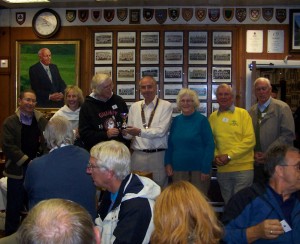 President Adrian concluded the evening official formalities by presenting the Rotary Petangue Challenge Cup to Northfleet with Ebbsfleet along with the mantle of organising next year’s challenge. Fortunately this did not interfere too much with the main purpose of the evening which was of course….FELLOWSHIP and catching up with good friends.