Home » News » On Your Bike success

28 April 2013 – A fine sunny day brought 820 cyclists to Gravesend promenade to join in the  annual On Your Bike sponsored bike ride. Some were casual cyclists or groups of friends wanting a leisurely ride in the countryside, some were families and others were keen cyclists. All were there to raise money for local charities. 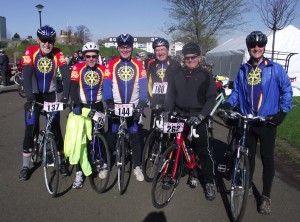 They had a choice of three routes, 15, 30 or 45 miles, selected with the help of the Gravesend Cyclists Touring Club to suit a wide range of abilities. The shortest went along the canal path to Lower Higham, up to Cobham and through the village past Jeskyns Park over the A2 and into Gravesend.

All those who completed the course returned to the Promenade to receive a certificate and a slate coaster – many already had a collection of these from previous years each with a unique design.  Those returning sponsorship money by the end of August will also be entered in a draw for a bicycle presented by Tri The Bike Shop of Gravesend.

This was the 27th year that Gravesend Rotary Club has organised the event which has become an annual “must” for many cyclists over a wide area.  During this time over £450,000 has been raised for local charities. This year the main charity is, again, the EllenorLions Hospice. The other charities will be chosen later in the year. Initial estimates suggest that at least £12,000 will be raised for these charities but it is usually several months before all the money comes in.