On Monday (28th October) Gravesend Rotary held a networking lunch. This event was part of the club’s networking programme that aims to foster interaction between businesses and organisations within the Borough and present opportunities to know more about them. Essentially, the lunchtime event successfully provided an opportunity for those attending to become more familiar with a local business and for sharing of knowledge, ideas and best practices.

Representatives from many local businesses and organisations attended as well as Cllr. Brian Sangha, GBC Cabinet Member for the Strategic Environment, and Keith Grimley, GBC Senior Economic Development. The strong interest in the event confirmed its value and its intent to be complementary to other networking activities in the Borough, such as GBC’s quarterly networking breakfasts. The club’s Rotarians, who have a wide range of vocational backgrounds, their spouses and members of the Inner Wheel Club of Gravesend energetically engaged with our visitors.

President Andrew Moffat welcomed everyone to the club and the cold buffet lunch. Many of the visitors were already familiar with the objectives of the club so President Andrew took the opportunity to reflect on current activities including the lighting of Gravesend’s clock tower in purple on 24th October 2019 in recognition of World Polio Day, the planned planting of 4,000 crocus bulbs in Woodlands Park on 12th November as part of the “End Polio Now” project and planning for the 34th annual On Your Bike charity ride to be held on 19th April 2020 with the local Alzheimers and Dementia Centre being the selected main beneficiary. 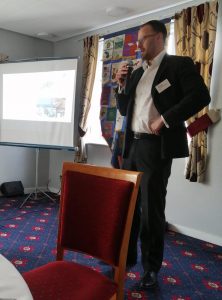 Tony Muckley, the club’s leader for business networking and membership, introduced the guest speaker Mr. Florian von Steinkeller, the Managing Director of Britannia Refined Metals Ltd.(BRM). Mr. von Steinkeller is also chairman of the International Lead Association and a Non-Executive Director of the US based International Lead Zinc Research Organization (ILZRO). He joined Xstrata in 2008 to help set up the corporate head office for Xstrata’s zinc-lead-silver assets in Australia before moving to his current position at BRM in 2012. Before Glencore Xstrata, he worked at the Royal Dutch Shell Group for 10 years where he fulfilled a number of senior roles in the downstream business, mainly focussing on M&A and Corporate Restructurings.

Mr. von Steinkeller gave a detailed and interesting presentation, explaining that BRM owns and operates the largest lead producing plant in Europe. Based in Northfleet it markets an extensive range of lead alloys essential for cable producers, battery manufacturers, and other niche industries worldwide. The company also produces silver and operates a fluorspar marketing business across Europe, the Middle East and Africa.  BRM has been part of the Xstrata group from 2003 until merging with Glencore plc. in 2013.

Having been established in about 1930, BRM has remained a long-standing member of the local business community throughout the evolution of the Borough. It continues to be one of the biggest operators in the Borough and a significant employer. BRM has a robust sustainable development programme, including support for the local social community, charities and the management and regeneration of adjacent marsh land for the proliferation of wildlife and enjoyment by the public.

After questions, Rtn. Bob Denby gave a vote of thanks to the speaker, and Andrew Moffat drew to the lunchtime session to a close.

Note: The club is grateful to Tony Muckley (assisted by Simon Lancaster and Bob Denby) for his efforts in arranging such a successful event.