Purple crocuses flowering at Thamesview Crematorium next Spring will be part of a world-wide battle against polio.

Gravesend Rotary presented 5,000 crocus corms to the new crematorium and cemetery at Gravesend as part of the Purple4Polio campaign to raise awareness and funds to eradicate the disease.

Purple is the colour of the dye placed on the little finger of a child to show they have been vaccinated against polio, hence the name Purple4Polio.

“We are so very close to ending polio,” said Bob Denby from Gravesend Rotary. “There are just three countries now where polio has been found and only 12 cases so far this year. This compares with over 300,000 thirty years ago. But to end polio there are still millions of children having to be vaccinated.”

South East Area Manager Kevin Wardle said;” This swathe of purple will make a big impact and be part of making this new crematorium a special place.”

Senior Gardener Rob Taylor and his team now have the task of planting the corms in a carefully prepared bank near where families leave the chapel after the services. 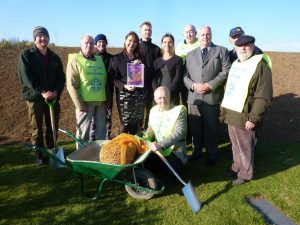 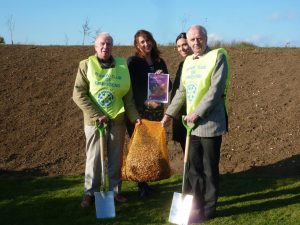 Gravesend Rotary Club is highlighting historic progress towards a polio-free world by providing these crocuses. Rotarians throughout Britain and Ireland are holding many Purple4Polio events to bring awareness of and raise money for the Rotary campaign to End Polio Now and forever.

With millions of children to vaccinate, this makes it easier to see who has been protected and who has not. We helping to make history by joining millions of Rotarians and supporters across the globe raising awareness, funds and support to wipe polio off the face of the earth.  Polio is a vaccine preventable disease that still threatens children in parts of the world today.

The world has have never been closer to making history and fulfilling Rotary’s goal of a polio-free world with just 10 cases of wild poliovirus worldwide so far this year in Afghanistan and Pakistan.

Rotary International in Great Britain and Ireland is also joining forces with the Royal Horticultural Society to plant about five million purple crocus corms across Britain and Ireland, adding to seven million planted last year, as part of our Purple4Polio campaign to raise awareness and funds for End Polio Now. Find out more here